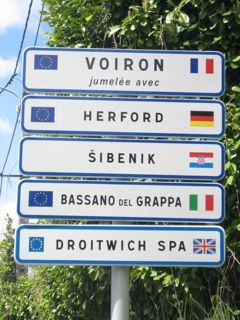 I’ve got a new campaign. It’s to encourage towns that are twinned with anti-gay Polish towns to de-twin.

It will send a message that bigotry is unacceptable.

Will it have an effect? I hope so. It includes a carrot. Towns that rescind the policy will be re-twinned.

It will also have the effect of discouraging other towns from passing similar motions.

It’s not easy to change people’s minds. Treating them as outcasts or pariahs may only strengthen their beliefs. They may feel beleaguered.

But to allow these towns to continue their anti-LGBTQ policies means tacitly supporting them. We have to demonstrate that civilised Europeans values encompass respect for minorities.

We take the excellent spreadsheet that lists Poland’s towns and regions that have passed anti-LGBTQ policies. From this we identify their twin towns, and ask the said towns to de-twin.

We notify the twin towns and their local newspapers, asking them to de-twin. And we notify the Polish towns that the de-twinning campaign is underway..

To do this, I’m setting up eurPTA.com (pronounced yurpta), the European Progressive Twinning Alliance. I welcome support for the campaign.