This project is about dead people. 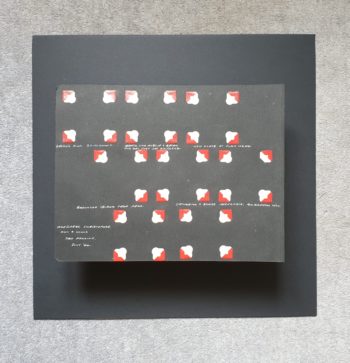 Artwork made from the pages of dead people’s photo albums.

It seems strange that people who were once so loved and admired, who were busy and vibrant, and had an impact on others lives – for example bringing up children – it’s remarkable they’re so quickly forgotten.

The ‘Missing People’ project involves the photo albums of those people. I remove the images, or buy albums where the photos have been removed. Then I frame them.

All that’s left are captions relating to who was in the photo, or where it was taken.

The mists of time have removed everything else about them. They’re lost forever.

Did they have children? Possibly not? Or maybe the children are dead, too.

No one escapes death

I keep a journal. Maybe I’m hoping to live beyond my death?

It’s mundane. Each day I talk about what I’ve been doing. It isn’t very interesting. But if I don’t say what happened, I think I didn’t exist on that day.

Perhaps, 50 years after I die, my great grand children will turn the pages of my journal. They may even see my art, and wonder about who I was.

Maybe I’m hoping to avoid the fate of the missing people?

Have you ever visited a nursing home?

My mother in law is on a nursing home. She is in the last stages of dementia. It means she has lost the power of talk; only moans. She doesn’t recognise me. If you go to a nursing home. you see people on the verge of disappearing.

And yet, you can see photos of them when they were young and vibrant. They laughed and sang. But in a nursing home they are on their way to oblivion.