How to stop a a 3D model from falling apart

Each 3D artwork can involve lots of little elements. Each of which could fall off. 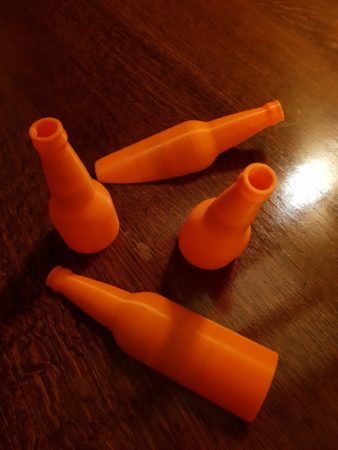 3D prints can have lots of different elements, each of which must not fall off.

3D art allows you to add any number of additions to an artwork. For my ‘Drunken Bottles’ artwork I could print any number of bottles, and place them wherever I wanted on the frame. They could be lying on top of each other, or hang over the end of the frame.

But the more fanciful I get, the more risk that one of the bottles will fall off.

And the thought that bits of an artwork would start to fall off in someone’s living room doesn’t bear thinking about.

Right now I’m talking to my printer* about how to prevent such a catastrophe. The artwork in question is my burger box which is more complicated than I’d like. There are chips (fries) all over the tray and poking out of the burger box. And the box has a hinged lid. The hinge is a weak point. If someone were to start fiddling with it, to maybe have a look inside, and it must be tempting, the box could come apart.

I’m asking the printer to shore up the hinge with hidden perspex or resin, and to drill holes in the bottom of the box so I can bolt it to the frame. Both the support and the holes need to be invisible to the casual viewer. This makes the printer’s job more complicated. I’m hoping he doesn’t decide to give up on me.

Meanwhile the chips have to stay glued to the perspex frame. Forever. And no fall off. That means choosing the right glue. Which is OK, except that the chips are made from modelling clay, while the box is made from PLA. And some chips have to stick to the box. Choosing the right adhesive for each pair is challenging. Especially as I have to despatch this particular burger box to an address far away. And the courier is scheduled to knock on my door in ten days’ time, and the box isn’t even printed yet.

Don’t get me wrong. I’m not complaining. And in the years to come I’ll wonder why I even thought this was complicated. But right now, I’m anxious.

* My printer is a human being, not an electro-mechanical device. I just wanted to make that clear. It’s true that I often talk to myself, but rarely to office equipment.